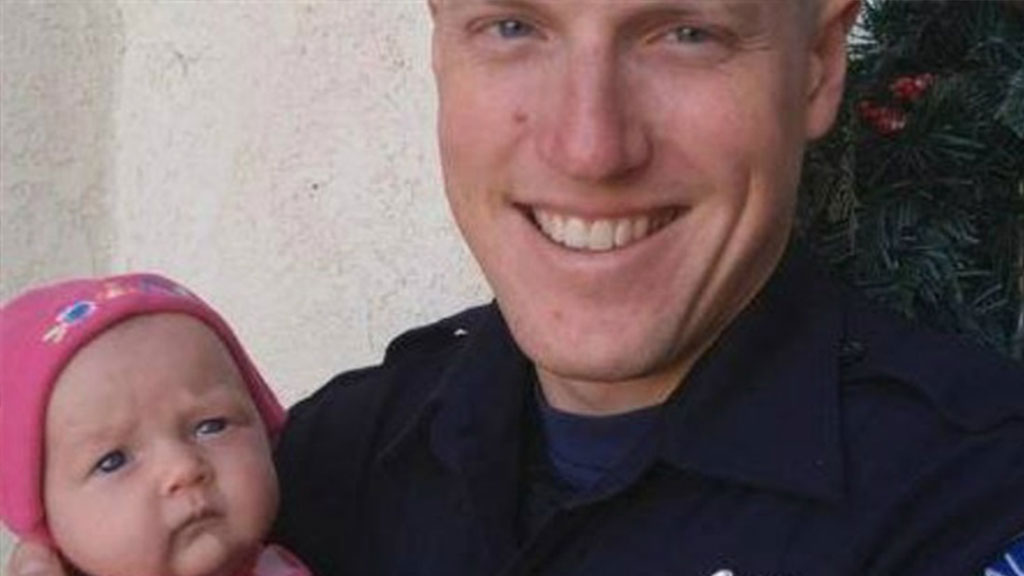 God is at work even in the most desperate situations.

That’s a truth America observed last night when Ryan Holets, an Albuquerque police officer, was honored in Washington, D.C., at the State of the Union address.

The remarkable story of Officer Holets began last September when he responded to a possible theft at a convenience store. The call proved to be a false alarm, but as Holets was leaving the scene, he noticed a homeless couple and made two quick observations:

The woman was pregnant, and she was about to inject herself with heroin.

Holets began to talk to the woman about her situation.

That’s when Holets said God spoke to him:

“Realizing that she was desperately wanting someone to adopt her baby, I just felt God telling me, ‘tell her that you will do it because you can,’” he told CNN.

Three weeks later, the mother gave birth and Officer Holets, along with his wife and four children, adopted the baby girl, giving her the name Hope.

Holets said his patrol call that September day was “no coincidence.” Rather, he claimed “providence” directed his steps.

Like Holets, you may have found yourself suddenly in the middle of God’s providential plan.

That’s because, when we allow Him, the Holy Spirit will guide us throughout our daily schedules and regular routines.

Consider the following examples from Scripture:

– David (1 Samuel 17:17-50) – At the request of his father, David was merely taking food to his brothers on the battlefield when he heard a giant Philistine taunting the living God. This small errand turned into a massive victory for the Israelites when David used his slingshot and unflinching faith in God to kill the giant.

– Ananias (Acts 9:10-18) – During a vision, a man named Ananias heard precise directions to a house where a man named Saul was praying. The Lord wanted Ananias to help Saul regain his sight so he could transform from terrorist to evangelist. Ananias went to Saul, laid hands on him, and prayed for him; Saul’s vision returned immediately.

– Philip (Acts 8:26-39) – One day, the Lord spoke to Philip and told him to go to a specific desert road. There, Philip found an Ethiopian eunuch who was reading the words of the prophet Isaiah but couldn’t understand them. The eunuch invited Philip into the chariot, and a life-changing conversation followed. Afterward, the eunuch asked Philip to baptize him.

When the Holy Spirit empowers us, we can accomplish extraordinary things, but we must be open to His leadership.

The same Holy Spirit who guided David, Ananias, and Philip is available to you today because He indwells every follower of Jesus (1 Corinthians 3:16).

Therefore, let’s obey what Scripture teaches about walking with Him:

“Since we live by the Spirit, let us keep in step with the Spirit” (Galatians 5:25).

You may not be asked to adopt a baby as the Holets family did, but you may be asked to bring hope to someone in a dark situation.

When you do, obey what Jesus taught:

“Let your light shine before others, so that they may see your good works and give glory to your Father who is in heaven (Matthew 5:16).

The story of Officer Holets adopting baby Hope reminds us that God is at work all around us.

Laura Lacey Johnson is a cutting-edge faith and culture writer who focuses on everyday headlines. In addition to speaking, she is a regular contributor to ChristianHeadlines.com and American Family Radio. To read Laura’s latest work on the headlines, visit www.lauralaceyjohnson.com, or to download your FREE copy of Why Jerusalem is Important to 3 World Religions, subscribe to her blog here.