Angel on the Stairs

Angel on the Stairs 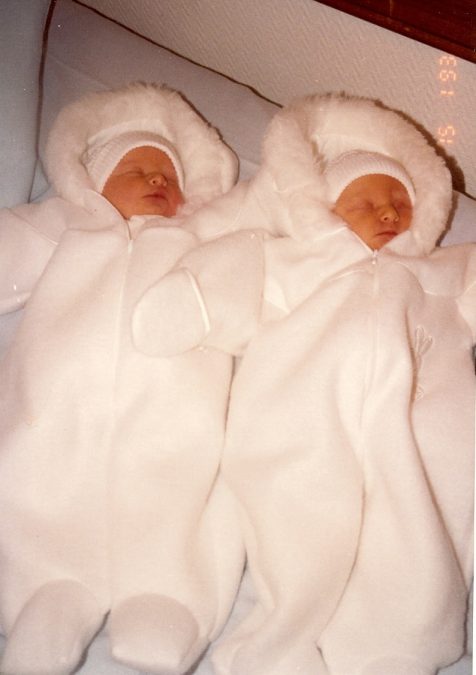 We’d always planned to have four children, but by 1992, our three children were already 14, 9 and 5, so when my husband and I spoke about having that fourth baby, we both felt we’d left it too late. We went to bed that night quite content with our decision not to have any more children, but the next morning, we’d both changed our minds!

Three months later, we were surprised and excited to discover that not only was baby number four on the way, but also baby number five. It was not an easy pregnancy, so in January 1993 when our beautiful, identical twin daughters arrived, we were both relieved and thrilled. They were a joy from day one, but within a few weeks, we came to realise that they were a gift from God that He had caused us to want and that He wanted to protect.

We lived in a four-storey house, and as the living room was on the ground floor and our bedroom was on the top floor, we had to climb up or walk down seventy two steps, divided into eight flights of stairs, every time we wanted to move from one room to the other. The flights went back and forth with a base platform at every turn. Initially, I did not feel confident enough to carry both babies at the same time, particularly as I was also recovering from their caesarean birth, so whenever I was alone with them, I would make two trips to relocate us.

However, after a few weeks, I did feel confident enough to carry both of them at the same time, so I left the bedroom with one in each arm, but as I stood at the top of the first flight, I had the strangest of experiences. I had a vision of me falling down the stairs with them. It was disconcerting, but it didn’t stop me heading down, although thankfully, it did make me hold them both just a little bit more securely in my arms.

I say thankfully because I’d only taken a couple of steps down the first flight when I fell, but if my vision had been strange what happened next was stranger still, for as I was falling and moving head first towards the wall directly in front of me and unable to put my arms out to break my fall, I experienced myself being lifted up. It felt as if hands cupped me under both of my arms, and the next thing I knew, I’d been placed upright on the base at the bottom of that first flight of stairs.

I knew something supernatural had just occurred. I was also instantly aware that my rescue had more than likely saved the lives of my babies. Had I hit the wall, I would probably have survived, albeit with a nasty head injury, but I knew that if the babies’ heads had made contact with the wall, their chances of survival would have been very slim.

Obviously, this was not something I could ignore or would ever be likely to forget; in fact, as I write about it today, the event is already twenty-five years old, yet I can remember the details as if it were yesterday. One thing that it did serve to do, and I’ve no doubt was intended to do, was to cause me to continue searching for truth. Since experiencing a supernatural event nine years earlier, I’d been searching for truth about the existence of God and had travelled in many directions exploring and investigating the claims of every major religions in the hopes of finding truth. However, it was not long after this event that I felt I had sufficient evidence to conclude that Christianity held the key and that the claim of Jesus Christ being the way, the truth and the life was correct, so on the 4th July 1993, I was able to fully accept and acknowledge Him as my Lord and Saviour. Since that time, the evidence has continued to grow, such that my faith and trust in Jesus Christ has deepened to a level far beyond that which I could ever have imagined when I took those first tentative steps of giving my life to Him.

What of those baby girls? Well I’m thrilled to be able to say, that on the 17th August 2003, they both accepted Jesus into their lives, and today are walking out the plans that God had for them before they even came into being. As the Lord told the Prophet Jeremiah in days gone by, so He has blessed my children. “Before I formed you in the womb I knew you, before you were born I set you apart;” Jeremiah 1:5a.

© Elaine Pounder (2018). Published by TLC World https://tlcwhk.com/ 7th April 2018. No permission is needed to share this article, but for publication on any other website, please seek permission first by emailing admin@thelittlechurchworld.org.

If you have a short story to tell that testifies to the goodness of Jesus Christ, and you’d like it to be considered for publication, submit it by email at goodnews@thelittlechurchworld.org