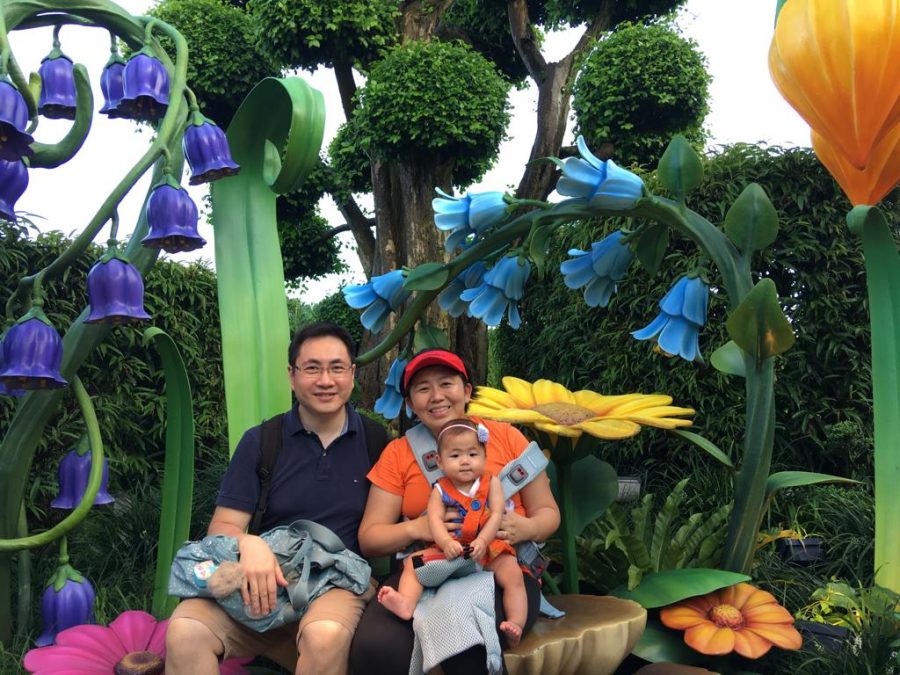 Hi, my name is Ailin Iwan Poon, and I am sharing this testimony to testify of God’s amazing love, grace, kindness, generosity, and faithfulness.

When I was in my mid-twenties, I believed that God had given me everything: friends and family, a dream job as a design director of a shopping mall, and my own beautiful apartment in California. I felt so fulfilled that it did not matter to me whether I would get married or not. However, I fasted for 40 days and asked the Lord if I should marry or remain single and that’s when God sent an angel to tell me that I would get married and have children. It took more than a decade for this promise of God to be fulfilled. In fact, I became ill in my late twenties with an illness that I thought would make it difficult to start a family and I wondered what the future would hold. God, however, remained faithful and prepared a very kind-hearted, talented architect who came to love me unconditionally. My husband, who is also my soul-mate, Kenneth K.Y. Poon, and I got married in 2015 in Hong Kong when we were in our mid-thirties, but by that time, I had been taking medication, considered harmful for a fetus, for about 10 years. Despite this, we still hoped the Lord would give us children, especially as I vividly remembered the angel’s visit.

In 2017, we went to the United States and visited two medical doctors: one was a gynecologist in Stanford and another was a fertility doctor in San Francisco. The first told us that if I got pregnant, it would be a very risky pregnancy and she told me not to have a baby. My husband, however, had a dream in which God gave him names for our future children. The first was “Melissa” (meaning “sweet honey”). We believed this was another sign from the Lord indicating that despite what people said, we should try to have a baby. In all honesty, at some point, I became relatively bitter about not having a baby, yet I did not lose hope because I believed in God’s faithfulness.

Toward the end of 2017, I found a Christian counsellor in Texas, who it seemed could heal my illness through bible study counselling. In early 2018, even though we were relatively busy with work in Hong Kong, we decided to take a leap of faith and fly to San Angelo, Texas to see him. We flew for over twenty hours and had two weeks of counselling with him, after which, he declared me healed giving me permission to stop my medication, and I felt so good and happy to do so. Upon returning to Hong Kong, my husband had another dream. This time, God gave the name “Judith” (meaning “praise”), and about 1 month after that trip, I found out that I was pregnant. My husband was giving a talk on high-rise design to masters-students from Malaysia in our new office when I discovered I was pregnant using a pregnancy test at home. We believe the conception happened in Texas, but we did not make much correlation with the names given by God to Kenneth in dreams until we actually found out our baby was a girl.

Contrary to the doctor’s expectation, I was very fit throughout the pregnancy. In my first trimester, I was working as a teaching assistant at The University of Hong Kong that required me to tutor 5 classes that semester. I was able to fulfill this commitment without much morning sickness and I only suffered fatigue from time to time. Furthermore, I was helping Kenneth to move office, which involved physical effort to pack and unpack. Around this time, Kenneth and I also received an invitation to give a keynote speech at Nanjing Normal University in China. We were cautious and consulted with our gynecologist before deciding to go and deliver the speech, participate in the conference, and visit a kindergarten.

As an older mother, I turned 38 that year, many of our medical friends suggested I should have the test to detect downs syndrome, but our Christian friends encouraged me not to do so and to simply have the ultrasound to monitor the baby’s progress. Kenneth and I took the latter route as we decided not to question God’s gift to us and instead to honor and treasure it. In the first formal ultrasound, we saw our little girl wave her hands and we took it as a sign that she was happy with our decision.

My parents, Susanto Iwan and Oey Suzy Wirawaty Iwan, visited us from San Francisco for about 1 month in my second trimester of pregnancy, and I was fit and healthy and able to have a great time touring Hong Kong with them. As I entered my third trimester, Kenneth and I were commissioned to design a kindergarten in Nanjing, so we traveled for the second time to this city and had a very packed schedule. We praise the Lord for giving me the strength and keeping me well towards the end of my pregnancy because there were many setbacks, particularly with the design work, and the demands led me to tire easily and become emotional through lack of rest.

My husband was in London receiving an International Business Award on behalf of our company when I began to bleed and was admitted into hospital. He returned immediately and I was allowed home, but within one week, I was admitted again due to a rise in my blood pressure. Once this was under-control, my doctor suggested I have a C-section to deliver our baby. This was not my first preference, but it was considered the safest method for our baby and my condition. I am thankful that at the moment we were making such a big decision, my mother was able to be with me as she flew from San Francisco just a day before our baby’s delivery.

My husband was allowed to be in the operating theater and while the C-section was being performed, he read my favorite verses from the bible. As our baby girl was delivered, my husband was reading Philippians 4:6-7 “Do not be anxious about anything, but in every situation, by prayer and petition, with thanksgiving, present your requests to God. And the peace of God, which transcends all understanding will guard your hearts, and your minds in Christ Jesus.” Melissa Judith Poon was born on October 30th, 2018 and is the seal of God’s faithfulness to our family. She is so lovely, adorable, healthy, and perfectly normal. We love her very much and our life has never been the same since her arrival.

It took more than a decade before the Lord fulfilled His promise of giving me a family. Throughout that time, I focused on serving in His Kingdom and trusting that He had the best plan for me. It is true that at the end of my pregnancy, I experienced a difficult time; yet, I believe God was with me all along, and it was because of His love, grace, and faithfulness that we can now hold our promised baby, Melissa Judith. We believe she is our miracle baby and we hope that she will bring “sweet praise” to the Lord. As it is written in the Bible, “And we know that in all things God works for the good of those who love him, who have been called according to His purpose.” (Romans 8:28).

I hope that my testimony will encourage you to trust that God has the best plans in place for your life, too, because at times, you may not see how your dreams can possibly be fulfilled. We all have such times, but thankfully, we can always have hope in the Creator of the Universe who is sovereign, loving, faithful, and full of grace.

No permission is needed to share this article, but for publication on any other website, please seek permission first by emailing admin@thelittlechurchworld.org.

If you have a short story to tell that testifies to the goodness of Jesus Christ, and you’d like to share it, please submit by email at goodnews@thelittlechurchworld.org